H is for Health 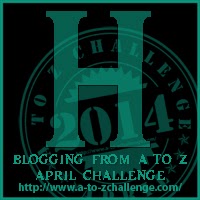 The ancient Egyptians were the first civilisation to recognise medicine as a profession. They developed practical cures for illnesses, rather than just praying and using spiritual remedies (though they did this as well).

Here are a few facts about ancient Egyptian health care:

- There were no anaesthetics available to Egyptian doctors, so surgical operations would have been difficult for them.

- Ancient Egyptians had no problem with health problems on the surface of the skin - they could reset dislocated joints, mend broken bones, and were excellent at stitching and bandaging wounds. They used willow leaves in the bandages, which are known for their antiseptic properties. However, there were no anaesthetics available to them, so surgical operation would have been very difficult.

- The Egyptians made use of medical textbooks when diagnosing patients. Their doctors would ask questions, take the patient's pulse and touch the pained area.

- The Egyptians believed in the 'Channel Theory'. They believed that sickness could be cured if the 'channels' of the body were unblocked, which they did by making people vomit, bleed or empty their bowels. Many of their cures were based on this theory.

- It was believed that the gods caused disease by disturbing the normal workings of the body. Egyptian doctors therefore would use prayers and spiritual remedies alongside their practical cures.