T is for Tombs (or Pyramids) 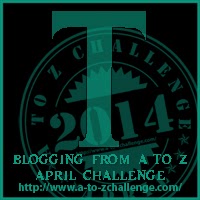 OK, so I'm being a little cheeky with this one, but the pyramids were built to be tombs, so I figure it's allowed.

- The pyramids were built as tombs for Pharaohs and their queens. The largest and most famous are the pyramids at Giza.

- The tombs were designed to protect the Pharaoh's mummified body, and the belongings he would need for the afterlife.

- Many of the pyramids are on the western side of the Nile, just into the desert. This made it easier to get the blocks to the pyramid using the river.

- Other ancient civilisations built pyramids (the Mayans, for example) but the ancient Egyptian ones are the most well known.

- Tomb robbers targeted many of the royal tombs, and most were robbed eventually. One tomb left largely intact was the tomb of Tutankhamun, which was located in the Valley of the Kings.

- Pyramid construction was abandoned during the Middle Kingdom, as pyramids were too easy for tomb robbers to find.

- Cities known as 'pyramid cities' grew around pyramids during their construction. There lived the people whose job it was to build the pyramids. These cities still existed after the pyramid was built.