W is for Writing 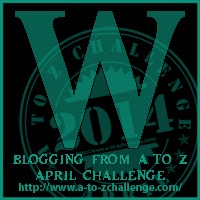 The ancient Egyptians were one of the first civilisations to use written language to record information.

- The most famous is the Egyptian hieroglyphic, though they also used other scripts. Hieroglyphics use pictures to represent different objects, actions, sounds or ideas.

- Ancient Egyptians would write in temples and on the walls of tombs, as well as on papyrus scrolls. This writing has helped us to understand a lot about ancient Egyptian beliefs, history and ideas.

- Hieroglyphics were deciphered with the help of the Rosetta Stone, which had three different types of writing on it; hieroglyphic, demotic and Greek.

- Hieroglyphics can be read left to right or right to left, or sometimes even from top to bottom. The trick is to see which way people or animal hieroglyphs are facing; if an animal faces left, you read from the left.

- Ancient Egyptians would write with thin, sharp reeds, which were dipped in ink which came from plants crushed and mixed with water.

- It was believed that writing in ancient Egypt was invented by the god Thoth.