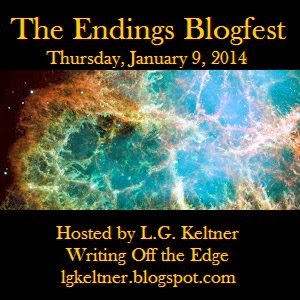 L. G. Keltner is hosting this blogfest to celebrate her two year blogging anniversary. You can pretty much write about anything as long as it has something to do with endings.

I was going to write some flash fiction for this blogfest, but I'm terribly disorganised at the moment and I ran out of time. So I'm cheating a little, and compiling a few quotes regarding endings instead.


“There is no real ending. It’s just the place where you stop the story.”
― Frank Herbert

“Ends are not bad things, they just mean that something else is about to begin. And there are many things that don't really end, anyway, they just begin again in a new way. Ends are not bad and many ends aren't really an ending; some things are never-ending.”
― C. JoyBell C.

“I always had this idea that you should never give up a happy middle in the hopes of a happy ending, because there is no such thing as a happy ending. Do you know what I mean? There is so much to lose.”
― John Green, Let it Snow

You don't reach points in life at which everything is sorted out for us. I believe in endings that should suggest our stories always continue.
― Lauren Oliver