Love is in the Air Blogfest

January 20, 2014
It's time for the Love is in the Air blogfest, hosted by the ladies over at Unicorn Bell. Here's what it's all about:

"It's a celebration of that little thing called love. Be it steamy or sweet, puppy, kitty, teen, aggravating, first kiss or final goodbye, let your scene tug at our heartstrings." 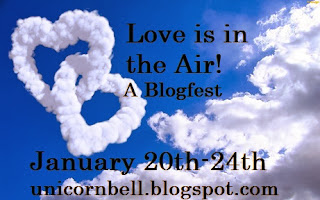 Yet again I'm terribly disorganised and didn't have time to write anything new for this blogfest, so I decided to reveal a scene from my NaNo novel. It's still in rough first-draft form and needs a lot of work, but I hope you enjoy it.

‘You know what they say about opposites, right?’ Alexia asked, twirling a piece of hair around her finger.
‘No, what’s that?’ Damian said, the corners of his mouth pulling up.
Alexia looked down at her knees. ‘Opposites attract,’ she whispered.
Damian turned to face her, and Alexia felt her face heat up as she lifted her head to look at him. ‘I think it’s true,’ he said, his blue eyes gazing into her grey ones with such intensity that it felt as though he was seeing into her soul.
‘Really?’ Alexia said, slightly breathless.
‘Yeah,’ he said. Alexia could feel her heart pounding; Damian was moving steadily closer to her. ‘I’m really glad you came here, Alexia.’ Their noses were almost touching.
Alexia closed the gap, her lips softly grazing his. She had been kissed before, but it was nothing compared to this. Her kisses with Aaron had always been pleasant, but this was on a whole new level. Her lips seemed to fit Damian’s perfectly, and her whole body felt warm. One of his hands was at her waist, pulling her closer to him, while the other caressed her cheek.
When they broke apart a few minutes later, Damian grinned. ‘I’ve been wanting to do that for so long.’