The Woman in Black

March 02, 2012
For some reason, I decided to put myself through the ordeal of watching 'The Woman in Black' last night at the cinema. I was invited by my mum and her boyfriend, and I thought "Sure, it can't be that bad!" Famous last words. 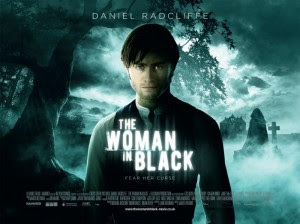 I should have known I wouldn't like it; I'm a bit of a wimp when it comes to scary movies, especially ones that involve paranormal activities - I can (usually) handle monsters and the like, because they're not real, but with paranormal movies I find it much harder not to get sucked in, because for all we know, ghosts could be real, so in my mind, that could actually happen to me! Therein lies my fear.

I managed to come up with a few coping mechanisms while watching this terrifying movie, the most obvious one being to hide behind my mum's coat whenever the music went spooky or went off completely, signifying an appearance of the WIB. My second coping mechanism involved the actor who plays the main character Arthur Kipps: Daniel Radcliffe. As anyone who has not been hiding under a rock for the last 10 years knows, he is the person who brought Harry Potter to life, and this is what I clung onto in the dark cinema last night. Anything I could connect to Harry Potter, I did. One of the first scenes shows Arthur travelling to the spooky village on a train, which automatically made my mind link to the Hogwarts Express! There was another part where he's asleep on a chair, and the WIB is coming up behind him, and it reminded me forcibly of the scene in Philosophers Stone, where Harry is wandering the halls of Hogwarts under his invisibility cloak!

I was actually a little surprised by Daniel Radcliffe's performance: he made an excellent Arthur Gipps, and in my opinion successfully shed the Harry Potter cloak he's been wearing since his childhood. His performance as the grief-stricken Gipps was totally believable, and while I linked parts of the movie to the Harry Potter movies, I didn't actually link Daniel Radcliffe to them.

Overall, although I didn't particularly enjoy the movie, I think it's excellent for lovers of the genre, and I really liked the storyline.