May the odds be ever in your favour!

March 28, 2012
I went to go see The Hunger Games on Monday night, and I loved it! I've been looking forward to seeing it ever since I found out they were making it into a movie, because I loved the series when I first read it. I did have fears that they were going to ruin it with the movie, like they did with Twilight, but I didn't have to worry about it, because it was great!

From the very first scene, I was hooked. I think they chose a brilliant cast for the film; I don't think there was one cast member who didn't suit their character perfectly. I was a little worried about Haymitch at first, but Woody Harrelson did a perfect job of playing the seemingly uncaring drunk, who cared in the end. I loved Jennifer Lawrence, Josh Hutcherson and Liam Hemsworth as Katniss, Peeta and Gale. I think they played their parts brilliantly, and really made me believe that they were the characters they were playing.
I love the way the Capitol was done, it was exactly as I imagined it to be when I read the books, from the buildings to the extravagant people living in them. The arena was amazing, too, and I loved being able to see the game-makers at work, which is something you don't experience in the book.
The only flaws are that they did change some things and leave things out that were in the book, but I can see why they had to do that to adapt it into a film. I also think it would be a little confusing for people who haven't read the book, but only a little.
So there's my review, and I loved the film so much I'm hopefully going to see it again tonight with my sister!

On a different topic, it's been lovely weather here for the last few days! Yesterday me and my mum went to walk Alfie, and we took him for a really long walk around the woods, which we only take him on in really warm weather. I love taking him on these walks, because we can let him off his lead, which we can't do when we take him to the park. He made friends with another dog we met on the way, and somehow managed to lose his collar when we weren't looking, so we had to clip his lead onto his flea collar on the way home, which wasn't good because that involved crossing busy roads and I thought it was going to snap because he was pulling on it so much! He also had the time of his life jumping in as many muddy puddles as he could find, and then shaking out his fur whenever he got near us! 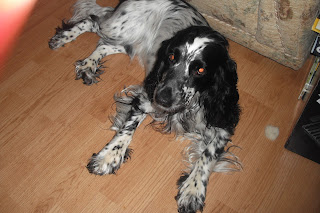 Thought I'd put a picture of him on :)