March 09, 2012
So, I had an awesome time at my sister's this week, and I get to spend even more time with her because I brought her back home with me so she can see mum and dad.
One of our traditions whenever I go over there is that we make fairy cakes together, and this visit was no exception: 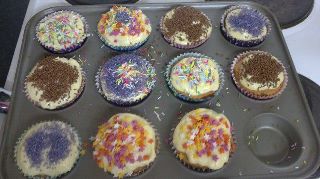 It was pretty late by the time we decorated them, so that's why they look a little messy! They tasted lovely though (I ate the one in the corner before I remembered that I wanted to take a picture of them!)

We also spent a lot of time playing on Katie's xbox, mainly on the new SSX game that's out, although we were pretty disappointed when we found out that it's not a multiplayer game, so we had to take turns. Katie, as usual, was pretty spectacular on it, coming first in all the races and beating everyone every time. I, however, am not as skilled at gaming as she is, and when I played we mostly heard cries of pain as my character went into trees and rocks. However, it was a lot of fun! 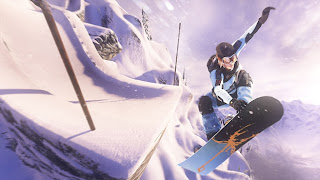 We also played a lot of Lego Harry Potter, which is another of our traditions when I go over there, and that's always fun.
On Wednesday night we went to go see This Means War at the cinema, and it was amazing! It was a very good cinema experience, as we were laughing before the movie even started! There was an advert for the guardian newspaper, which was like a mini-movie itself:

﻿
Anyway, the movie was also very good, I can't remember the last time I laughed so much at the cinema. The movie is about two CIA agents, and best friends, who both fall for the same woman (Reese Witherspoon, who I absolutely LOVE). Hilarity ensues as they try to make her choose between them, by sabotaging dates in some pretty funny ways. I'd recommend this movie to anyone, male or female.