October 27, 2014
It's time for one of my favourite annual blogfests, hosted by Dani and Jackie at Cover Girls. 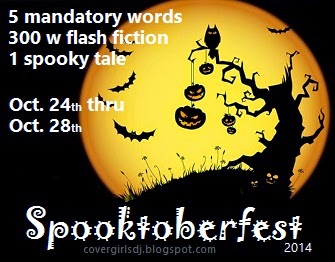 “Whose idea was this?” Robbie whispered as we crept across the old church yard.
“You’re the one who said you were bored!” Luke said, side-stepping a crumbling gravestone.
“I meant we should play a game or something!”
Charlie turned around to face us. “You’re not chickening out?”
“No,” Robbie said, “but what about the curse?”
“Oh come on,” Charlie said. “You don’t actually believe that, do you?”
“Well…” Luke said. “Nobody ever sets foot in the church - there must be a reason for that!”
“Yeah,” Charlie said, turning back to the church shrouded in darkness. “Because they’re hiding something from us! Come on.”
He moved forwards; Luke, Robbie and I exchanged glances before following.
Charlie stopped in front of the battered door. “Let’s do this.” He took a large, rusty key from his pocket and inserted it into the lock.
“Where did you get that?” I hissed.
Charlie shrugged. “Father Hemlock’s office. It was in a drawer, it wasn’t even locked or anything.”
The door creaked as he pushed it open, the sound echoing in the large room. The only thing I could make out were the shadowy silhouettes of broken benches.
Charlie edged his way in, beckoning for us to join him. No sooner had we stepped inside when a gust of wind swept through the empty church, slamming the door shut behind us. There was a commotion as we all scrambled towards it, trying to pull it open. A chill crept down my spine as I realised: we were trapped, cocooned inside the church.
Robbie started coughing. “I don’t feel so good,” he croaked.
“It must be that virus you had last week,” Charlie said, sweat trickling down his face. He tried the door again.
It wasn’t long before we were coughing, too.