C is for Cupid and Psyche 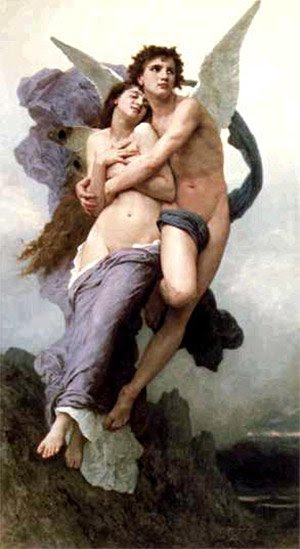 Cupid (also known as Eros) was the son of Aphrodite (or Venus). He was the personification of love and desire, who threw arrows at people to make them fall in love.
There was a King who had three daughters, the youngest of which, named Psyche, was so beautiful that people would worship her. Aphrodite grew jealous, as people weren't worshipping her as much as they used to, so she made Cupid agree to make Psyche fall in love with a disgusting creature as punishment. However, when he laid eyes on her and saw her beauty he was unable to do it.
No man would marry Psyche, as they were all intimidated by her beauty, so her father went to ask Apollo for advice. Apollo said that they should take Psyche to the top of a mountain to wait for her monstrous husband to appear.
Once alone there, a wind carried her to a wondrous palace, where she was waited on by invisible servants and visited by her husband only at night. She knew he was not a monster, and was happy with him until her sisters, jealous of Psyche's life, said that he must be a monster, as he wouldn't let her see him.
These words haunted Psyche, and one night she lit a candle and held it over him, to see what he looked like. She saw a beautiful man and her heart filled with relief, until she spilled candle wax on him and he awoke. He fled, betrayed by what his wife had done.
Psyche was determined to find him, and went to pray at Aphrodite's temple. The goddess was still jealous of Psyche, and so gave her three impossible tasks to perform before she could have Cupid. Psyche completed these with a little help, but Aphrodite was still unwilling to help her, so the gods intervened and told Cupid what was going on. The betrayal in his heart healed, and they got married. Zeus made Psyche immortal as a wedding gift, which made Aphrodite happy as the mortals were no longer worshipping Psyche.