October 26, 2016
It's time for the 5th annual Spooktoberfest, hosted once again by Dani and Jax from Cover Girls. There's still time to enter - the bloghop is open until Friday. 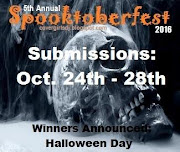 Here's my submission, coming in at 336 words.

The moonlight shone on the smooth black of the coffin, laid open by the side of the grave. The body, a mere skeleton now, lay on the long grass next to the weathered stump of a tombstone, the skull grinning up at the cluster of men gathered around it. A broken machete lay next to the bones, dusty and worn from it’s long incarceration under the ground.

The only sounds were the whispering of cloaks as they slithered along the forest floor, as the men encircled the lone grave. They began to chant in a language long forgotten, known only to those who passed it down, generation to generation, waiting for this day to come.

For the rise of their god.

A wind blew through the clearing, tearing through the grass, blowing down the hoods of the chanting men, but they ignored it, engrossed in their task. The clearing was plunged into darkness as clouds covered the full moon, and the chanting intensified.

The bones began to shake, rising slowly into the air. The magic wrapped around them, causing them to glow in the darkness, as they fused together once more. Flesh grew around the bones, the clearing now lit by the blinding white light coming from the body.

The light went out, the chanting stopped; all was darkness. Not a sound rent the still air.

Until the laughing started. An insane cackling, with wicked delight.

The clearing filled with light again as the clouds slowly drifted away from the moon.

The cloaked men lay strewn over the ground, unmoving. In the center stood a creature not of this world. It’s newly formed skin was mottled and dead looking, the red eyes cold, it’s mouth twisted into an evil grin. It picked up the broken machete, which was renewed with a burst of light. The creature took a cloak from one of the men on the ground, took one last look at the grave, with its unreadable headstone, and strode from the clearing, laughing once more.