June 26, 2014
I haven't participated in WEP for such a long time. This month's theme is Romance, not one of my stronger genres, so I thought I'd give it a try. 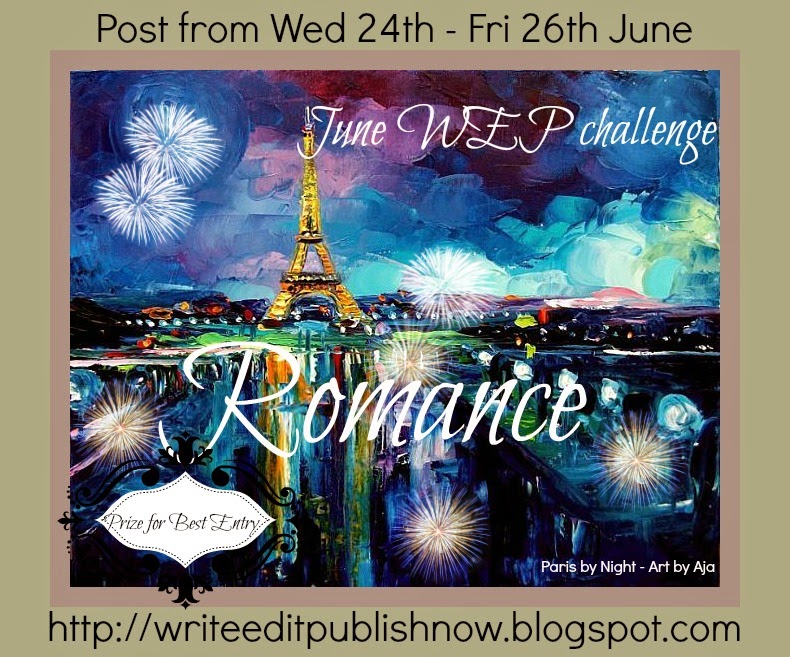 Last year I got an idea for a novel, and the following scene was inspired by that novel idea. Hopefully I'll get the rest of the novel written for NaNoWriMo in November. I wrote it kind of last minute so it's not brilliant, and it's not your typical romance either. I hope you enjoy it!

The door creaked loudly as I opened it, echoing around the small dark room. She was sat rigid on the mattress, wide eyes fixed on the door, but when she realised it was me, she relaxed and lay back on the mattress, smiling slightly. I edged inside, locking the door behind me, and crossed the concrete floor to sit beside her. I held out the brown paper bag in my hand, and grinned.


“Guess what I brought?”

She sat up, her eyes fixed longingly on the bag. Then they flicked to the door.

“Don’t worry, he’s not home. He’s out for the night.” I said, reaching into the bag and handing her a cheeseburger and fries.

Relief flooded her face and she took the food eagerly. She bit into a fry and groaned, her eyes closed as she chewed. “This is possibly the best thing I’ve ever tasted.”

“I thought you’d like it,” I said, leaning back against the brick wall.

“So, what’s the occasion?” she asked, taking a bite of her burger.

“I just figured you’d be getting sick of noodles.”

“Sorry,” I said, reaching over and grabbing a fry. “They’re pretty much all Steve buys.”

She stiffened at the sound of his name.

“Oh yeah?” She said, raising an eyebrow. “He already hurt me once.”

I reached out and traced the fading yellow of the bruise under her eye. “But I wasn’t there then. I won’t let him hurt you.”

A sad smile appeared on her lips, and she put a hand over mine. “You wouldn’t be able to stop him.”

I took her hand in mine, marveling at how small it was. “I promise you,” I said, looking her straight in the eye. “I promise you I won’t let him hurt you, ever again.”

She smiled properly then, but I could tell she didn’t believe me. I released her hand and picked up her fries, discarded on the worn blanket covering the mattress. “Here, finish your feast.”

She took the fries and began eating them slowly, as though she was savouring every one.

“I’ll have a word with Steve about feeding you better,” I said, running a hand through my hair.

She paused, a fry halfway to her mouth. “It doesn’t matter, the noodles are fine.”

This time I rolled my eyes. “How can the noodles be fine? They probably have zero nutrients in them.”

“I just…I don’t want you to make him angry.” She looked at me, her eyes wide. “I don’t like it when he gets angry.”

“Look, he isn’t going to get angry just because I suggest a change in your diet. Anyway, it doesn’t have anything to do with him. I can buy all the food, and cook it. He doesn’t even have to know. If it makes you feel better, you can have noodles when he’s in and when he’s not, I’ll cook you something.”

She smiled. “I can’t imagine you cooking.”

I shrugged. “Well, to be honest I’ve never really tried. But it can’t be that hard, right?”

She giggled, and I gave myself a mental high five; it was so hard to make her laugh. She put the food wrappers back in the paper bag and handed it to me. “Thanks,” she said, her cheeks turning pink. “I appreciate it.” She looked up at me and instead of the smile I was expecting, I could see tears in her eyes.

I put the bag on the blanket and took her hands. “What is it?”

I stroked her lank hair off her face, wanting her to stop crying but not knowing how to stop it. I bit my lip. “I can’t, you know I can’t.”

“I won’t tell anyone, I promise,” she said, tears streaming down her face now.

“Because,” she whispered. “Because it would get you in trouble, too. And I wouldn’t want that.”

My heart leapt, but I pushed my feelings down. “He knows where you live. Even if I did let you go, he would just hunt you down and…”

“And what?” she asked, her voice shrill. “Do something worse than this?”

My face was inches from hers now; I was desperate for her to understand. “Yes! He might hurt you then, he might do something unthinkable! He brought you here just because he panicked, not because he was thinking clearly! If I wasn’t here, he might have already…”

Her eyes widened, and her face paled.

She looked down at her feet and I nudged her face up gently so she was looking at me. “It’s safer for you, if you stay here,” I said, wiping away her tears. “I can look after you here. I won’t let him touch you.”

I was so close to her now we were breathing in the same air. “You’ll look after me?” she whispered.

She leaned forwards and our lips met; it was the single happiest moment of my life, and one of the worst.

It was true; it would be extremely difficult to let her go, but not just because of Steve.

I just couldn’t bear the thought of letting her go.