October 17, 2017
Time for my favourite month of Write Edit Publish, the Halloween edition. I can't wait to see what everyone's come up with for this prompt! 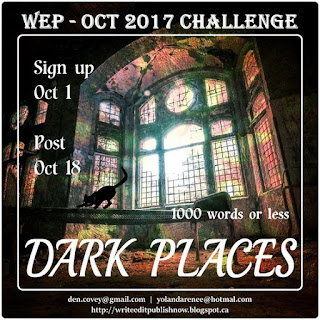 His voice is quiet, almost a whisper. He looks even worse than the last time I saw him; there are dark shadows under his eyes and his skin has a greyish pallor, dark stubble coming through on his jawline. It’s a stark contrast to the immaculately groomed man he was before.

‘Of course,’ I say, stepping forwards and closing the door behind me. ‘Where are we going?’

He doesn’t answer, but pulls me along behind him. Dry leaves skitter across the ground in the chilly breeze, and crunch underfoot. Autumn has arrived all of a sudden; I wrap my arms around myself, wishing I’d thought to bring a coat.

‘I wasn’t expecting to see you, it’s nice to see you out of the house. Are you … feeling better today?’ I ask gently.

He slows, staring down at his feet. ‘Yes,’ he says. ‘And I’ll feel even better once we’ve finished.’

He doesn’t answer again. We walk past countless shops, all decked out with cobwebs and plastic spiders, skeletons dangling in doorways, lit pumpkins grinning fiendishly from windows.

The sky darkens as the sun sets. ‘Sam, where are we going?’ I ask again, as we leave the brightly lit town behind, heading for the dark path into the forest at the foot of the mountain.

‘You’ll see,’ he says, staring forward eagerly. It’s the most animated I’ve seen him for a long time.

‘Did you at least bring a torch?’ I ask. He shakes his head, and I curse myself for not picking up my phone as I left the house.

We walk through the quickly darkening forest together, him in front, hurrying along the path. I wonder where it is we’re going; maybe somewhere he used to go with Angela? Maybe he’s finally starting to get over it.

Eventually he tugs me off the path, and I hesitate. ‘Are you sure we should leave the path?’

‘We have to,’ he says. ‘Don’t worry.’ He smiles, and I see the old him shine through, if only for a second.

‘OK,’ I say, and I follow him, picking my way across the uneven forest floor, trying to avoid tree roots and rocks, which gets more difficult the darker the forest becomes.

He gets a little ahead of me; he must know this route well. After a while, his footsteps stop abruptly, and I push through the trees to find him staring at a large gash in the rock of the mountain ahead.

He laughs, but it sounds unnatural. ‘You worry too much. It will be fun.’

His eyes are darting from side to side, and suddenly I feel anxious. I try to shake the feeling off; he wouldn’t put me in any danger.

‘Please? I need you to do this with me. I can’t do it alone.’ He holds out a hand, his bloodshot eyes beseeching.

I sigh. ‘Only because you’re my best friend. You know I’d do anything to help you.’

He smiles again, a ghost of his old smile. It doesn’t quite reach his eyes.

I take the hand that he’s holding out to me, and follow him into the cave. It’s pitch black, and I have to feel my way using the jagged rock wall. My breath comes in sharp gasps, and I can feel sweat dripping down my face. After a couple of minutes I see a green tinged light ahead. The cave widens out and we enter a large space, lit by the faint greenish light. I can’t work out where it’s coming from; there’s no light source that I can see, and it’s just barely enough to penetrate the darkness. In the middle of the space I can just make out a large mass; as I move closer I see what looks like a stone sarcophagus. There is something laid out on top of it, covered in a sheet.

I move closer still, trying to see what it is; this must be what he wanted to show me. Then I see it; the hand protruding from the sheet with grey, mottled skin, the bones easily visible through the rotting flesh.

I take a step back, hands over my mouth. He stops me, his hand clutching my upper arm tightly, his fingers biting into my skin.

‘I’m sorry,’ he says, a hint of sadness in his eyes. Then it’s gone, and his eyes light up as an insane smile spreads across his face. He gazes lovingly at the mound on the sarcophagus. ‘They said I could have her back. They’re going to bring her back to me.’ He shakes his head, tears in his eyes. ‘I’ve tried to live without her, I really have. I need her. All I have to do,’ his eyes land on me again, ‘is sacrifice someone else that I love.’

‘This is insane,’ I spit, desperately trying to free myself from him. ‘Who? Who told you you could have her back?’

‘They did,’ he says, and suddenly there’s a knife inching its way towards my throat. ‘I’m sorry,’ he said again, the light still in his eyes, ‘I wish there was another way. You’ve been a great friend, Faye.’

His arm jerks, and I feel pain as the knife slices through flesh. As I fall to the ground, my vision fading, I hear a rustle as the body under the sheet begins to move. The last thing I see is it pulling the sheet from its head, before I fade away into darkness.