October 26, 2015
Now it's time for one of my favourite Halloween blogfests, Spooktoberfest! The goal this year was to include all 13 Scattergories; difficult, but I managed it! 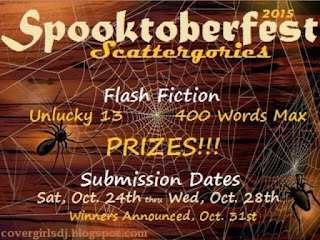 
A bat swoops down from the velvet black sky, shuddering as it lands next to a cauldron brimming with liquid. Suddenly the bat is a man, tall and pale, a dark cape enveloping him. He looks around, taking in his surroundings. Crumbling tombstones stand in the cracked soil at his feet, the bare limbs of trees moving in the frigid wind.

A hearse pulls up at the ancient gate, and out steps a beautiful woman, a paper bag in one hand, a milkshake in the other. She approaches the man at the cauldron, sipping at her drink, a cat at her heels.

“Oh hush,” she says, pulling things from her bag. “There’s time enough, Isaac. I only just managed to get everything we need. A frog,” she says, throwing one into the simmering potion.

“Are you sure this will work?” Isaac asks, wringing his hands.

“Of course it will. An amethyst, for healing,” Lila says, adding the purple gem. “Chocolate, for sweetness, and beetles, to balance it out.” She throws the chocolate and the beetles in, after offering one to her companion. It crunches as he eats it. Lila takes out a knife and slices down her arm, letting the blood droplets fall into the potion. She takes out a bandage and wraps it around the cut.

“I just need some of your venom,” Lila says, holding out her hand.

Isaac smiles, fangs glistening, and draws a small bottle from his cape. “I knew you’d need some.”

She adds it to the potion and it fizzes before turning scarlet. “It’s ready.”

He steps forward, his cape flapping in the wind, and raises his arms.

A deep rumbling sounds from below as the earth beneath their feet cracks open. A coffin breaks through the gap, coming to a stop when it reaches the surface.

“My love,” Isaac says, caressing the smooth wood. “We can finally be together, once more.”