Ghosts (and the girls who love them) Blog Hop!

September 16, 2012
For my last post before my week away in Centerparcs, I thought I'd put up my story for Jessa Russo's Ghosts (and the girls who love them) Blog Hop! 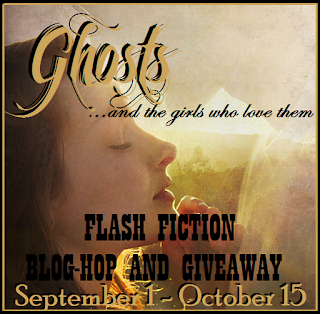 The objective was to write a piece of flash fiction between 300-1000 words long, with the theme of ghostly paranormal romance. Here's my entry:

He found her sat in the chair in the corner of their bedroom, rocking back and forth, clearly struggling to hold back tears. The bed in the centre of the room was rumpled and unmade, which was unlike her; the first thing she usually did when she got up was make the bed. There were clothes littering the floor, mainly his; she had always told him off for his scruffiness. It unnerved him to see the room looking so messy, she was usually such a clean-freak.
He hovered in the doorway. He had been told that she wouldn’t be able to see him from now on; occasionally she may hear the creak of a floorboard as he moved over it, or feel the coolness in the air whenever he was around, but that was it. He’d decided to come back anyway; he couldn’t bear to be apart from her, even if he couldn’t be a part of her life anymore.
He moved further into the room, wanting to be close to her, whether she could see him or not. He didn’t know how long it had been since he’d last seen her – time moved differently for him now; sometimes slower, sometimes faster, interspersed with blank periods where he seemed to just…disappear.
She looked exactly the same as the last time he’d seen her; her light brown hair flowed in waves down her back, just the way he liked. Her fingernails were bitten so short it was a wonder she had any left; she had always bitten them in stressful situations, he had teased her about it constantly. He supposed there would have been plenty of reason to bite them recently.
He moved cautiously across the room, walking right into the lamp which stood at the end of the bed; his clumsiness had obviously followed him to the afterlife. He stretched out his hands to catch the lamp, before realising that he had gone straight through it. It was going to take him a long time to get used to being like this.
She looked up suddenly, and her eyes immediately locked on his. Her face brightened, and he actually turned around and looked behind him, expecting to see someone else stood there. She couldn’t be looking at him, she wasn’t supposed to be able to see him, they had told him so.
There was no mistaking it; her brown eyes were looking directly at him, and he could see them filling with hope.
“It’s really you!” She cried, before running towards him, arms outstretched. She made to embrace him, but ran right through him as if he were smoke. He turned slowly, thinking how strange it was to have someone run through him and him not feel anything.
The hope had gone from her face, and her outstretched arms dropped down to her sides. All he wanted to do was scoop her up into his arms and tell her everything was alright; it pained him that all he could do was stand there.
“You shouldn’t be able to see me.” He said after a moment.
She looked up, her brown eyes fixing on his grey ones. “But I can.” She hesitated, then walked towards him, looking him up and down. “So…you’re a ghost?”
“Apparently.” He replied. She ran her fingers through her hair, deep in thought. He smiled; he loved that gesture.
“I’ve missed you.” She said. “I never thought I’d see you again…”
“I’m so sorry. I’m sorry that I was driving so recklessly, and I’m sorry for leaving you like this. I’m just glad you weren’t in the car with me.” He remembered the moment he knew there would be a crash, and all he could think in the moment, when he was sure he would die, was that he was glad she wasn’t going to die with him.
“Don’t apologise.” She smiled. “It was just a stupid accident; it could have happened to anyone. All that matters is you’re here now, with me.” Her smile widened, and he couldn’t help but return it.
“I love you so much.” He said.
“I love you too; I never want to go through losing you again.” She reached out her hand, and held it against his face. He felt a slight heat coming from it; the first physical thing he’d felt since the accident. She reached her arms out to hug him again, and this time, there was resistance. His body seemed more solid, allowing her to hug him lightly.
“I never want to lose you again, either.” He said, holding her as tightly as his body would allow. He knew that he was being selfish, that she was better off if he left her alone to get over him. An unforgivable thought flashed through his mind: it would have been much easier if she was in the car with him, then they could be together forever.
He knew that it was unhealthy for a girl to love a ghost, but he couldn’t let her go…

Hope you liked it! To vote for my entry, comment at the end of the end of each post. You must have the word "VOTE" in your comment for it to be considered valid.
I'll be back on Saturday, so have a great week everyone! :)