WEP - Back of the Drawer

February 15, 2017
So here is my contribution to this month's WEP - Back of the Drawer. I've literally written and edited it in one day (today) so it's not great! I had such good intentions for this challenge, then I went and got ill so I've had to force myself to write it. Still, I'm pretty proud that I'm even posting anything, so it's a win in my eyes! Hope you all enjoy it, anyway. 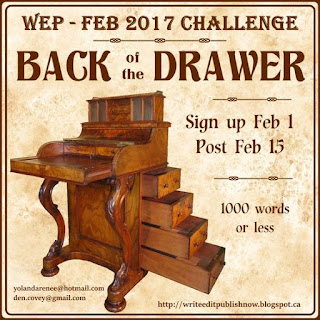 She carefully climbed over the junk on the floor so that she could reach the light switch. She switched it on, and sighed again. There was a reason she’d been putting this off for so long.

She rolled up her sleeves and surveyed the mess, trying to decide where to start. There was an old cabinet pushed up against the wall closest to her that looked as though she could have it cleared by lunchtime. Tripping over a couple of old toys on the way, she started clearing.

Half an hour had passed before she found it, folded up tight and pushed right to the back of the second drawer from the bottom.

She pulled it out carefully, smoothing her hand over its silky surface. It was more beautiful than she remembered; it had been a long time since she’d allowed herself to think of it. She had forgotten where she had hidden it, all those years ago. Age hadn’t affected it at all. A few minutes passed in silence as she gazed down at the velvety folds, remembering. Her past life, her original life, seemed almost like a dream, now…

Shaking her head, she hurried into the house, taking the bundle with her. She needed to snap herself out of this. The red light was flashing on the answering machine; she pushed the button to listen to the message.

“Hey, sweetie. Guess you’re still working on the garage! Just calling to let you know I’ll be home early tonight. I’ll pick up the kids from school; you’ll be tired from your big cleanup! I love you, see you later.”

Coralina frowned, her hands stroking the soft object in her arms. She strode over to the window, watching the waves lap against the shore across the road. An overwhelming urge was overcoming her, one she had hoped never to feel again. She wrenched her gaze from the window, to focus on her tidy living room. She tried to master herself; this was stupid. This one, tiny thing couldn’t ruin everything she’d built over the years. She had a husband now, a family she loved more than anything.

Well, that’s what she had thought. Her family seemed to glare at her from the pictures on the mantelpiece, as though they knew exactly what she was thinking.

But how could they? They didn’t know her biggest secret.

She raced across the living room, slamming the door on her way out of the house. She flew across the road without even checking for cars first, and dashed across the beach.

Just one more time; once more, and she would hide it away forever. She’d burn it if she had to. She just wanted to feel it one more time, that sense of belonging, the joy of being truly free.

She took one look back at the house; the garage door was still open wide, and she could see the mess within, calling to her, along with the rest of her mundane life that, until today, she thought she had loved so much.

One big breath, and Coralina threw the bundle over herself. The skin fixed onto her seamlessly, and she transformed, feeling whole for the first time in years. She threw herself into the waves, long-hidden flippers propelling her quickly through the water, all thoughts of her family erased from her mind by the sea.

She was finally home.